In what’s being calling one of the greatest breakthroughs in reproductive science history, doctors in California say they have performed the first uterine transplant to a man. The man, Mr. Gary Miller,  is hoping to give birth to his first baby in early 2016.

“Whenever I’m at the gym, at the golf course, or at work, the conversation with the guys inevitably comes back to why women get to have all the fun and carry a baby. Why do they get to be the ones to nurture a fetus growing within them and establish a bond that we as men can never know?” 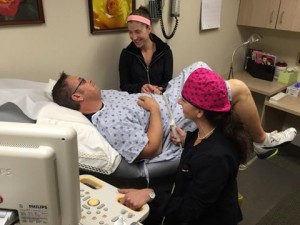 Findings on this  breakthrough research project led by California physician, Dr. Aimee Eyvazzadeh, are being published in the British journal The Lancet.

“We are so excited to be able to help this family and hopefully so many more with this procedure,” Eyvazzadeh tells the associated press. “I’m looking forward to helping men achieve their dreams of experiencing labor and delivery for the very first time in history.”

In order to prepare for the transplant, Mr. Miller had to take immunosuppressive medication for several weeks to get his body ready and to prevent organ rejection.  Surgery typically ranges from 7-9 hours and risks include infection, bleeding and uterus rejection. If this works, he is prepared to have the first documented embryo transfer to a transplanted uterus in a male next month.

The idea to transplant a uterus came from Dr. Eyvazzadeh. She has been following the work of Swedish researchers who performed the first series of uterine transplants in women very closely and felt like offering the same procedure to men would perhaps be something that most American men would be interested in. She has been talking to her patients about her groundbreaking uterus male transplant research and most of the male partners of her patients would ask: “If a uterus could be transplanted to a woman, why can’t doctors transplant one to a man?” This is exactly what Dr. Eyvazzadeh has been able to do today. 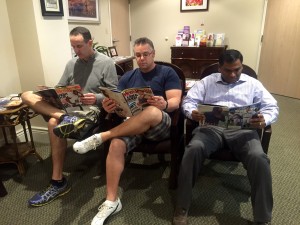 Since the report of today’s surgery has become public, men have been requesting to become patients of Dr. Eyvazzadeh. If you are interested in becoming her patient or want to talk to your doctor about performing this surgery on your male partner, please click here for the exact protocol used.

Sign up to receive new articles each week from Dr. Aimee
and other guest experts.